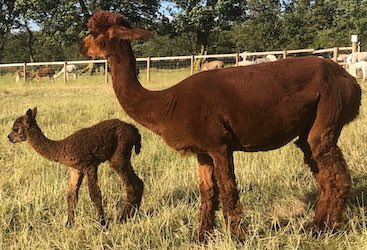 If you are up to scratch on Egyptian Pharaoh history then it will not be a surprise to discover that Nefertiti’s second daughter we called Meketaten.
She has a lovely crimpy brown fleece and a trusting personality inherited from her sire, Golden Guinea.
Meketaten’s first ever show was the 2011 Border Union show at Kelso. She came away with 1st intermediate brown girl, brown Champion and Reserve Supreme Champion (one of our other 2010 girls, Casiphia was Supreme Champion) – pretty amazing for a brown – and she is!
In the 2011 Westmorland show she was also 1st intermediate brown girl and brown Champion. The judge, Liz Barlow, was so impressed she awarded a ‘special award’ of the show (the only one!) to Meketaten – what a superstar! Liz described the feel of her fleece as running your hand through a silk carpet and suggested that breeders and public alike should check her out, which they duly did!
Her first fleece was entered in the 2011 Scottish National fleece show and was awarded 1st place junior brown with a superb score of 75.5 beating many of the whites!
Her second fleece measured 100mm and 24.5 microns, with a standard deviation of 4.8 and 10.3% over 30 microns. Nice!
Meketaten is the proud mum to Murphy, Tiaa, Anubis, Deja Vu, Hector and Pharaoh.
She is currently adopted by Holly Hart, Naomi Tindall, Joelle & Pauli, Melissa Best, Nadine Paschen & Liam.
This website uses cookies to to help us see how our website is doing and to allow you to buy from our online shop.That's fine.
Privacy & Cookies Policy