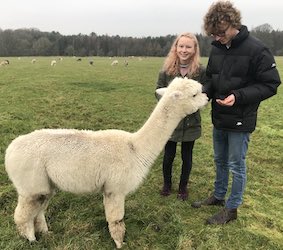 Oscar (meaning jumping fighter) was born after the longest ever Barnacre gestation of 410 days, 342 is the average! Despite this long gestation he only weighed 4.68kg.
He had a plasma infusion within a few hours of birth and that gave him the strength to lift up his head and feed from a bottle (mum didn’t have any milk).
It was a few days before he was strong enough to stand and his hips weren’t quite right but with persistence and determination we got them sorted, but then he developed an ulcer in his eye, which we cleared up but then his eye ruptured and his iris was protruding. After a corneal graft his eye healed slowly, as he then developed a cyst!  Other than a little bulge on his eye you’d never know anything had occurred now!
Oscar is one of our regular walk and talk volunteers and a frequent traveller to the markets with the knitwear.
Oscar has been adopted by Mercedes Suffolk, Mick Styles, Jill Murray and Heather Swanson.
This website uses cookies to to help us see how our website is doing and to allow you to buy from our online shop.That's fine.
Privacy & Cookies Policy