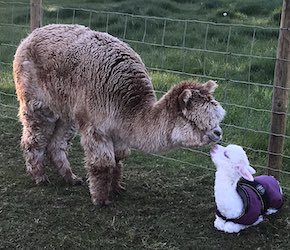 This is Minimus, sired by Gianmarco’s Masterpiece and born to Chiquita whilst we were at the 2010 Otterburn Festival in aid of the Great North Air Ambulance. He might just be the cutist alpaca in the world! He was a tiny 4kg at birth, and took nearly a year to reach 14 kg, some of our cria only take a month to do that!  At 7 years old he finally hit 40kg fully fleeced and old age is accompanying weight gain as he’s 48kg at 10 years old.
Minimus lives with the big girls as the big boys play tough rough and he can’t throw them off if they sit on him.  He doesn’t seem to mind and is very close to his mum and siblings! His picture is from May 2018 when he was saying hello to Gabby’s new baby 😍
Perhaps being small saps your energy as Minimus can often be found having a little snooze in the middle of busy shows!
Mark Hollings, Robbie Hall, William Young, Jacqueline Carr, Emmanuel James Smith, Moggy Morris, Hannah Morris, Nicky Bender, David Fletcher, Phil Finch, Maia White and Angela Smith currently adopt Minimus.
This website uses cookies to to help us see how our website is doing and to allow you to buy from our online shop.That's fine.
Privacy & Cookies Policy