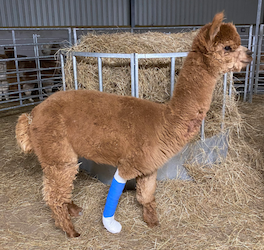 Pablo is sired by the charming Golden Guinea and from Chiquita, one of our home bred girls. He won the following prizes on the show circuit:

After completing his time in the show ring Pablo has become one of our stud boys and has sired some fantastic cria.  He sadly broke his leg very badly at the end of 2019 and spent almost a year having surgeries to try and save his leg which meant girl friends were off the cards for a while.  Thankfully he has made a full recovery so this year will hopefully get a girlfriend or two in the summer.