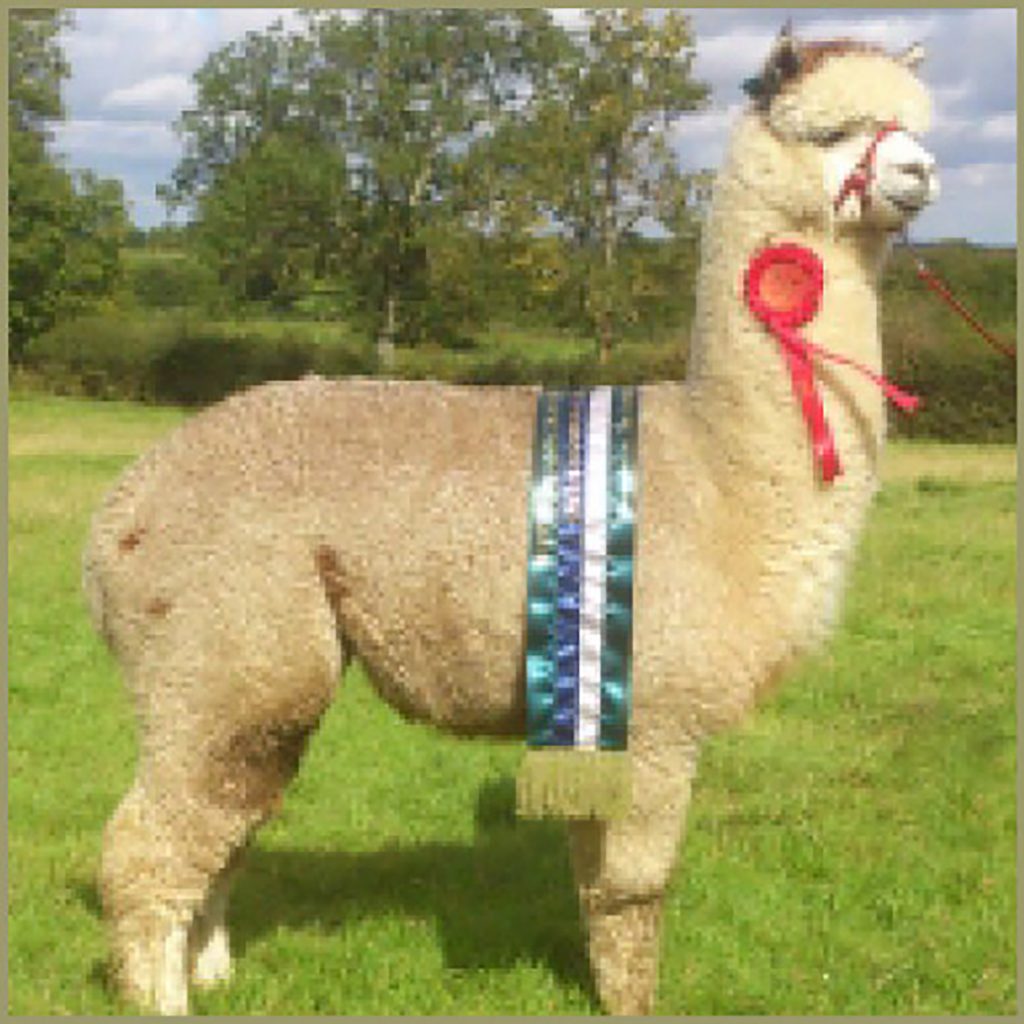 Undefeated quintuple (5 times) grey champion, perhaps one of the best Rose Grey alpacas in the world?

Wyona Sunburst of Karkawarri arrived in the UK in 2012. He was carefully selected in Australia by Anzac Alpacas to join their sister stud ‘Karkawarri Alpaca Stud’ that specialises in breeding grey and black alpacas.

With an incredible fleece displaying characteristics only found in superior whites, Sunburst has a very fine, bright fleece with great density and superior crimp style carried from head to toe.

Bred from a family of Champions, Sunburst is a highly advanced grey male that has been bred from the most elite grey lines in Australia. Bloodlines include: Blue Grass Waterloo Sunset, Pinjarra Buenisimo, Jolimont Warrior and Jolimont Conquistador. His Australian show record is outstanding including 1st place Junior Grey Male at the 2012 Australian Alpaca Association National Show, the biggest most competitive show in Australia.

An undefeated quintuple (5 times) grey champion in the UK, Sunburst has the true eye catching presence we demand from our stud sires. When we first saw him at the 2012 Westmorland County Show he blew us and everyone else away. He went on to win 1st Grey Adult Male, Grey Champion and then in the Champion line up was Highly Commended by judge Cathy Lloyd – a grey in the running for Supreme Champion?!

As soon as we got our hands on his fleece we entered it in the 2013 Alpaca Futurity fleece show, this was rewarded with 1st place Adult Grey and then Grey Champion.

His third Championship was the 2013 National Fleece Show where he was awarded 1st place Adult Grey then Adult Champion – yes this was an age Championship and he beat all colours including white! The judge Nick Harrington-Smith was extremely complimentary, and this is a man who has seen some great greys!

Championship number 4 came at the 2013 Westmorland County Show where he again was awarded 1st Grey Adult Male and Grey Champion by judge Tim Hey who was highly complementary.

His fifth Grey Championship was awarded at the 2013 Yorkshire Alpaca Group Show after won 1st Grey Adult Male. Judge Mary-Jo Smith said he was a worthy winner and a truly macho male.

Grey Alpacas always attract attention in the field and it is our most heavily demanded natural knitwear colour.

We recommend Sunburst over your grey, black and fawn females so to book a mating or arrange a viewing please contact us.

Sunburst has 55 progeny so far around 20 are grey including Barnacre Flint, a quadruple champion.