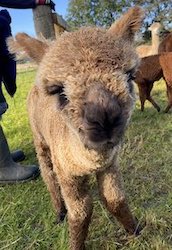 This is Ziyad, everyone’s favourite! His name is Egyptian and means “to add” and he is certainly a keeper!

He is rather special, his mum started to deliver his inside the placenta so Debbie had to break the sack quickly to help get him out.

Ziyad has a congenital defect called choanal atresia which means he has a blockage somewhere in his nasal passage so he snorts a bit, it may be something that needs surgery but the vet is hopeful that he can manage without as apparently the surgery isn’t very nice!  He was also starved a bit of oxygen at birth so is a little ‘special’.